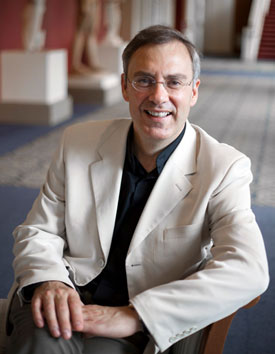 An award-winning conductor and composer, Richard Prior has a rich musical family heritage that includes Fred Waggett (a prominent figure in mid twentieth-century British conducting), flautist Albert Waggett (a founding member of the English Opera Group with Benjamin Britten ) and composer/ jazz saxophone legend, Tim Garland. His own musical training began in his native England, where he received degrees from Leeds and Nottingham Universities, and was later a visiting Fellow-in-Music and guest composer at Oxford University. Richard is an Associate Fellow of the National College of Music in the U.K. For twenty-five years, he taught composition and built notable symphony programs at several universities and colleges in the United States, before moving exclusively to professional conducting engagements and composing.

A winner of numerous awards for his conducting and compositions, Richard received the 2008 Harvey Philips Award for Excellence in Composition at the Cincinnati Conservatory of Music, the 2009 Winship Award and 2011 Crystal Apple Award for Excellence in Education at Emory University. His choral-orchestral work hymn for nations united received Awards of Merit in two categories (Symphonic Music and Composition) in the 2013 Global Music Awards. The acclaimed tone poem commissioned and recorded by Robert Spano and the Atlanta Symphony Orchestra, “…of shadow and light…(incantations for orchestra)”, won 3rd Place nationally for the 2021 American Prize in both “Compositions for Orchestra” and the “Ernst Bacon Memorial Award for the Performance of American Music”. Recent composition projects include Symphony No. 4 (also commissioned by Robert Spano and the ASO), and a piano concerto for renowned British pianist, Ian Hobson.

CONDUCTING
In addition to leading orchestra programs in academic settings at large state Schools of Music and smaller, aspiring liberal arts colleges, Richard was the Music Director and Conductor of the Rome Symphony Orchestra from 2008-2015, holding the Georgia Power Conducting Chair. In July of 2015, he was appointed the Music Director and Conductor of the LaGrange Symphony Orchestra, and in 2019, Music Director and Conductor of the Auburn Community Orchestra. A committed music educator, he has conducted high school honor groups all over the country, including multiple All State orchestras. In 2016-2017, he undertook conducting and composition residencies with the Texas Tech University and University of Illinois Urbana-Champaign Symphonies. Richard was the National Flute Association’s conductor for the 2019 National Convention’s Concerto Gala Concert, featuring concertos with Chelsea Knox (Metropolitan Opera Orchestra), Helene Boulegue (Stuttgart Symphony), Jonathan Keeble (University of Illinois) and Christina Smith (Atlanta Symphony Orchestra), presented at Abravanel Hall, SLC, Utah.

With a deep background in choral music, Richard is a genuinely versatile conductor who can draw together the forces for opera as well as major choral-orchestral repertoire. With an upbringing and training in the rich tradition of English cathedral choirs, he was the Lord Edward Boyle Choral Scholar at Leeds Minster while an undergraduate at the University of Leeds, studying voice with renowned contralto, Jean Allister. Richard has held a number of choral conducting positions, including Associate Director of Ilkley and Otley Choral Societies,  interregnum Master of the Choristers at St. Luke’s Parish Church, Bradford. He was also the founding Director of Nottingham University Chamber Choir and the English Cathedral Chamber Choir, undertaking residencies at various cathedrals including Lichfield, Peterborough and Wells. In the U.S., he has continued to conduct numerous choral groups as part of regular annual choral-orchestral collaborations, the Oratorio Singers of Charlotte and notably, stepped in to lead the Atlanta Symphony Chorus and ASO (ATL Musicians) in performances of the Mozart Requiem during the 2014 contract negotiations.

Reviews in the professional press cite his “stirring conviction”, “precision”, and “stylishness and flexibility”, with the noted “meteoric rise” of ensembles under his direction. Richard’s mentors and principal teachers include Sir Simon Rattle, James Paul and William LaRue Jones. He is a founding member and past president of the College Orchestra Directors Association (South Central Division); he served on the Atlanta Regional Commission’s Arts and Cultural Assessment Committee and is past-President of the 501c(3) ReStringHaiti organization, dedicated to restoring and expanding music education and performance opportunities to Haiti.

COMPOSITION
From works written as a child and presented in the presence of Queen Elizabeth II to his professional debut in 1988 at London’s Westminster Abbey, Richard’s music has been performed, recorded, and broadcast widely in Europe and North America. His composition teachers and mentors include Alan Ridout, Philip Wilby, James Fulkerson, Nigel Osborne and Trevor Wishart. He has been a selected participant in workshops and master classes with a diverse array of composers including Pierre Boulez, Henryk Gorecki, John McCabe and Milton Babbitt.

Matt Haimovitz premiered Richard’s cello concerto in 2014 in a performance conducted by the composer, and said of the work “Richard’s music embraces a soaring lyricism, cinematic in scope with a rich sense of orchestral colors. The cello writing is wonderfully idiomatic, deeply satisfying for the cellist to play and interact with the orchestra. This new concerto is a major contribution to the cello repertoire.” The concerto has also featured at the University of Delaware with faculty cellist Lawrence Stomberg and at the Peninsula Music Festival with Maestro Victor Yampolsky and cellist, Denise Djocik.

The Atlanta Symphony Orchestra and Music Director Robert Spano commissioned “…of shadow and light… (incantations for orchestra)” which premiered in 2013. Subsequent critical review called the work “forbidding and dramatic”, “stunning” and “jubilant and exuberant” and identified Prior as “perhaps the most gifted of the Atlanta composers”, citing his mastery of orchestration, lyricism and musical drama. Recorded by the ASO in 2019 on the orchestra’s own label,  in 2021, “…of shadow and light… (incantations for orchestra)” won 3rd place nationally in The American Prize’s Compositions for Orchestra, and 3rd place nationally in the the Ernst Bacon Memorial Award for Performance of American Music.

The ASO went on to present three performances of his Symphony No. 3 under the direction of Robert Spano (a work also featured at Northwestern University under Maestro Victor Yampolsky, and the Cairo Symphony in Egypt, with the composer conducting).

Reviews and commentary from the Chicago/Midwest premiere called Prior “a symphonic sorcerer”.

“Richard wrote us a fantastic piece last season, and, as with many of our family of composers, we wanted to follow up this season with more of his music. His music is so powerful, dramatic and colorful, that it has an immediate impact. But living with it over time, it grows deeper and richer.” Robert Spano, quoted in the Atlanta Journal Constitution

Reviews in Atlanta called the work “a major new symphony”, “always engaging and the soundscape is constantly changing” and the long-time Atlanta Journal Constitution critic James Paulk said “…it’s the best new work I’ve heard here. Prior is rapidly becoming Atlanta’s preeminent composer”. Atlanta music critic William Ford wrote “This is a major work that is a triumph of integration, emotion, flow and orchestration. It should be heard and the ASO should record it.”

Other notable premieres have included String Quartets No. 1 and 2 with the Vega Quartet, The Darkening Land with clarinet virtuoso Richard Stoltzman and the Pulitzer nominated choral-orchestral work, Stabat Mater, the subject of a PBS broadcast.